I’m absolutely delighted to be taking part in the blog tour for The Dry by Jane Harper which will be published tomorrow – 12 January – by Little, Brown. 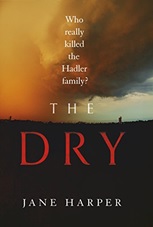 Aaron Falk left his home town of Kiewarra 20 years ago.  Against his wishes and his better judgement, he has now returned to the small farming community for the funeral of his one-time best friend, Luke Hadler, after Luke shot his wife and son before turning his gun on himself.

Aaron wants to get the visit over and done with as quickly as possible – Kiewarra brings back a lot of bad memories – but when Luke’s parents ask him to investigate the death of Luke and his family, he can’t refuse.  Aaron works as a Federal Police Investigator in Melbourne, but he’s out of his jurisdiction, and he teams up with the local police officer, Greg Raco, who also has a few questions over the apparent murder-suicide.

The Dry successfully weaves together the investigation into the Hadler family’s deaths with another, older mystery that was never successfully solved, although plenty of people have their opinions about what happened on both counts.  I don’t want to say too much about the second element, as I think that it’s something best discovered by the reader, but the two mysteries come together really well, and both add a great deal of intrigue to the novel.  And I really liked the way that parts of the novel are told through flashbacks giving the reader hints towards both mysteries.  This is a device that can sometimes result in a disjointed novel, but I thought that Harper used it really well in The Dry, and those sections fit seamlessly into the novel, helping to enhance the story.

I absolutely loved the small-town setting of Kiewarra.  It’s one of the those towns where you’ll always be a newbie if you weren’t born there, and where everyone knows each other’s secrets, family history and comings and goings.   This is a town with plenty of family feuds, and Aaron’s return does cause a few sparks for those who thought they’d seen the back of him.  The tense, almost claustrophobic atmosphere is also enhanced by the drought that Kiewarra has been experiencing for the last two years.  Detrimental to the farming community and local economy, it’s easy to understand why tempers are short, and why Aaron’s questions often rub people up the wrong way.

The Dry is, quite simply, astounding.  You’d never know that this is Harper’s debut from the quality of – it has absolutely everything.  It’s well written, has great, well-rounded characters, the mystery has plenty of twists, turns and red herrings, and everything is neatly tied up by the end of the novel.  I absolutely loved it.

The Dry will be published on 12 January.  Many thanks to Grace Vincent for providing a copy for review.