Is it mid-year already?  How did that happen?!

Many thanks to Tina at Reading Between the Pages for tagging me into this.  We, or at least I, so rarely get the time to pause and take stock, and it can be nice to look back over the last 6 months, as well as ahead to what’s coming up.

1) The best book you’ve read so far this year?

Ask me on a different day and you’ll get a different answer, as I’ve read some amazing books this year, but the one that sprang to mind when I read the question was The Dry by Jane Harper.

I loved the setting, the characters, the writing, the twists in the plot.  Basically, this book has it all.

2) Your favourite sequel this year?

I adored Sleeping Giants by Sylvain Neuvel, and I was eagerly awaiting Waking Gods, which did not disappoint.

I love the epistolary format of both novels, and it was interesting to see what became of the characters a few years down the line, as well as finding out more about the nameless interviewer.

3) A new release that you haven’t read yet but really want to?

New Boy by Tracy Chevalier.  Part of the Hogarth Shakespeare Project, this is the first in that series that is based upon a play that I’m familiar with, telling as it does the story of Othello in a rather different setting.  I’m really looking forward to reading this!

4)  Most anticipated release for the second half of the year?

There are so many releases that I’m looking forward to over the second half of the year, but the one that springs to mind is Godsgrave by Jay Kristoff.  I LOVED Nevernight, and I can’t wait to see where the story goes next.

The Sellout by Paul Beatty.  This was a book chosen by my book group, and I was looking forward to it as it also fits in with my Booker Prize Challenge (yes, that is still going on, although I haven’t read a Booker winner for longer than I care to admit).  The main issue was that I couldn’t get into it – I found it to be extremely hard work.  Additionally, the humour is very American, and as such, I found that some of it went over my head.

6) Biggest surprise of the year?

A Clockwork Orange by Anthony Burgess.  This was another book group read, and one that I enjoyed much more than I expected to.  It’s not an easy read, and the language is difficult to get to grips with, but it’s worth persevering with.

7) Favourite new to you or debut author? 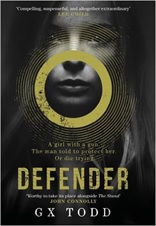 G. X. Todd, author of Defender.  I loved her debut novel, and I can’t wait to read the next instalment in this series.

Hmmmm… I always struggle with this one, as I don’t really do fictional crushes.  Nope, sorry – can’t think of any! ☹

This is another tough one, but I’ll go for Atalanta from For the Winner.  I loved her attitude to life, and her determination to be treated as an equal, despite the view that women were largely considered to be property at the time.

It doesn’t happen often, but Eleanor Oliphant is Completely Fine prompted a tear or two.  Whilst I didn’t take to her at first, Eleanor is a great character, and I was fully invested in her story by the end.

I’m struggling with this one!  I genuinely cannot think of a good answer to this question.  I have a tendency towards books that are bleak in nature, and so happy isn’t usually a factor.

12) Your favourite book to movie adaptation that you’ve seen this year?

I really enjoyed the adaptation of Paula Hawkins’ The Girl on the Train.  I loved the book, and thought that the film was really well done.

I think that it’s nice to do the occasional post that isn’t a book review, and I do particularly like writing up by experiences at Hay Festival.  I also enjoyed putting together my Blogiversary Giveaway post, as it was a chance to give back something to everyone who has supported me over the last two years.

14) The most beautiful book you have bought/received this year? 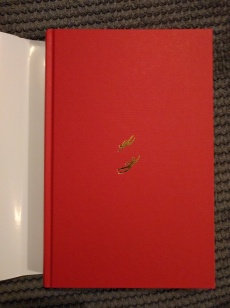 The Wanderers by Meg Howrey.  I think that these pictures don’t quite do it justice, but the cover is lovely, and I love the little cut out detail, and the two little embossed people.  And those end papers!

15) What are some books that you need to read by the end of the year?

Here are a few of the books from my TBR that I REALLY want to read:

Skitter by Ezekial Boone – the follow up to The Hatching which I read last year and really enjoyed, despite the spiders!

Norse Mythology by Neil Gaiman – a book I picked up this year’s Hay Festival.  I’m less familiar with Norse mythology, but I’m really looking forward to this

Yesterday by Felicia Yap – a debut novel that will be published in August, and that I’m lucky enough to have a proof of!

Susan @ Books from Dusk Till Dawn