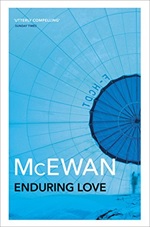 Enduring Love opens with a tragedy.  As Joe Rose and his partner Clarissa are about to start a picnic, they are interrupted by a cry – a hot air balloon has come loose from its moorings, with a ten-year-old boy trapped in the basket, and his grandfather is struggling to prevent it drifting away.

Joe joins other bystanders in trying to gain control over the balloon, but one man dies in the attempt as the balloon is swept up in the fast winds and carried away.  It’s tragic, and it’s a moment that will stay with Joe and Clarissa forever, yet they seek to move on with their lives.

But one of the other helpers – Jed Parry – a man with whom Joe shared little more than a glance during the events, now believes that Joe is in love with him, a feeling which is reciprocated, and he begins to hound Joe, damaging his relationship with Clarissa, and driving him to desperate acts.

I haven’t read many novels by Ian McEwan, and I’m not sure if I would have picked this one up had it not been my book group’s choice for the month.  I have to say that I didn’t particularly enjoy it – it’s not a bad book, but it wasn’t to my taste at all, and I found myself feeling quite frustrated with it at times.

Firstly, I didn’t understand Joe’s reaction to Jed.  Whilst he doesn’t encourage Jed’s behaviour, he also doesn’t seem to do much to actively discourage it either.  Granted, it’s an atypical situation to be in, but I didn’t buy Joe’s reactions at all.  This isn’t helped by the fact that I didn’t particularly like Joe as a character, so I could never muster enough sympathy for his plight.

My frustrations with the novel weren’t helped by it being quite drawn out in places.  At one point Joe, who is the narrator, states:

What takes a minute to describe took two seconds to experience.

And therein lay part of the problem.  Events were overdone and drawn out, and by the time we got to what was actually happening, I was bored by the huge lead up to what was quite often a non-event.

As I say, I don’t think this is a bad book, but the delivery just didn’t work for me.  I did like the potential double meaning of the title, however, which I took to mean that some loves do endure, that love is resilient even through the hard times, or that some loves are to be endured, whether we want it or not.  Both are applicable to this novel.

Have you read Enduring Love, or any other novels by McEwan?  I’d love to hear some views on his work, and I expect that I’m in the minority of not being a fan (I am open to reading more of his work, however – I’ve not been put off completely).