Hosted by Kate at Books Are My Favourite and Best, Six Degrees of Separation selects a new novel on the first Saturday of each month.  That novel is linked to six other books to form a chain, and readers and bloggers are invited to join in by creating their own ‘chain’ from the selected book.

It’s the first time I’ve taken part in the meme, but I enjoy the monthly posts from Janet who blogs at From First Page to Last, and thought I’d have a go!

This month, we’re starting with The Dry by Jane Harper. 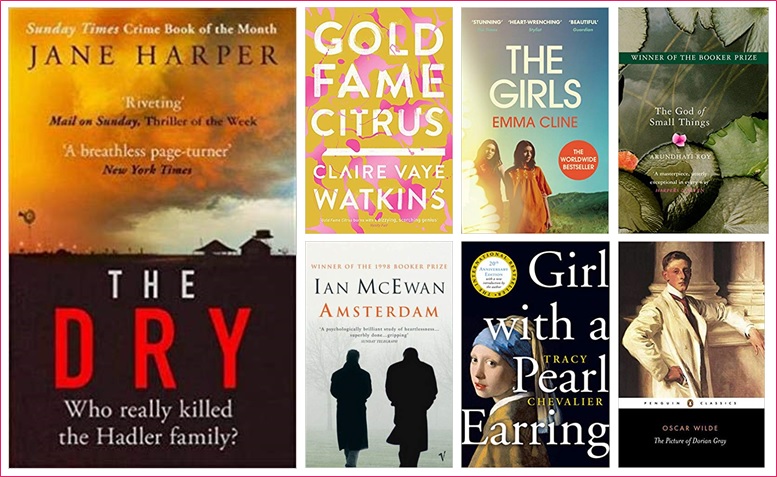 The Dry takes place during a severe drought, and this reminded me of Gold Fame Citrus by Claire Vaye Watkins, which is set in the near future in a waterless American South West.  While California has long been a magnet for many people, drawn by the promise of gold, fame, and citrus, very few people are left, the majority having sought the more fertile land to the north.  One of the groups that does remain in California is a cult-like community that the main protagonist falls in with.

The Girls by Emma Cline also features a cult.  Set in the summer of 1969, fourteen-year-old Evie Boyd is desperate to be noticed, and joins a group of girls who live in a commune and who don’t pay much attention to rules.  The Girls examines the pull of cult-leaders.

Another novel set (partially) in 1969, is The God of Small Things by Arundhati Roy.  This is the story of Rahel and Estha, twins who grow up amid the political turmoil in Kerala.  Arundhati Roy won the Man Booker Prize in 1997 with this novel.

The year after Roy won the Man Booker Prize, Ian McEwan won with his novel, Amsterdam, which features two old friends who are reunited at the funeral of Molly Lane.

Amsterdam is, of course, the capital of the Netherlands, which is also the setting for Tracy Chevalier’s Girl with a Pearl Earring, inspired by the painting of the same name by Johannes Vermeer.

Another novel to feature a piece of art is The Picture of Dorian Gray by Oscar Wilde.  Deemed scandalous when first published in the late 19th century, Wilde’s only novel features a young man who shows no signs of aging, nor of his decadent and immoral lifestyle.

So there you have it, from The Dry to The Picture of Dorian Gray in six steps.  Let me know if you’ve had a go at this – I’d love to know where your links take you 🙂