LAUREN IS CRYING. LAUREN IS EXHAUSTED.

Behind the hospital curtain, someone is waiting…

After a traumatic birth, Lauren is alone on the maternity ward with her new-born twins when a terrifying encounter in the middle of the night leaves her convinced someone is trying to steal her children. Lauren, desperate with fear, locks herself and her sons in the bathroom until the police arrive to investigate.

But there’s nothing on the CCTV. No one remembers seeing a woman come close to Lauren, or her babies. They don’t believe anyone was ever there.

And yet, Lauren keeps seeing the woman and is convinced her babies are in danger. With every step she takes to keep her children safe, Lauren sinks deeper into paranoia and fear. From the stark loneliness of returning home after birth, to the confines of a psychiatric unit, Lauren’s desperation increases as no one will listen to her. But here’s the question: is she mad, or does she know something we don’t?

Lauren is a new mum to twin boys, Riley and Morgan, and is struggling to cope with looking after them, questioning whether she is fit to be a mother.  Shortly after their birth, exhausted and alone in the hospital, she encounters a strange woman who threatens to swap the twins for her own children.  Terrified, Lauren calls the police, but CCTV footage doesn’t show anyone entering the hospital, nor does anyone find any evidence of anyone having been on Lauren’s ward. Everyone – the psychiatrist, Lauren’s husband, the security guard – convinces her that it was an hallucination, a result of the stress and exhaustion that Lauren is trying to cope with.  Unsure what to believe, Lauren lets it go, but begins to see the woman outside of her own house and becomes increasingly convinced that her children are in danger.

Little Darlings is a chilling story, and it’s difficult to know whether Lauren is becoming increasingly paranoid, or perhaps experiencing postpartum psychosis following the birth of her children, or whether she is telling the truth.  It’s easy to sympathise with Lauren, which made me want to believe her, especially as her husband has decided that she can look after the house and children, seeing himself as the breadwinner, and who even goes as far as to move to the spare room so that he can sleep through the night undisturbed, with little concern for Lauren’s own wellbeing.  It’s so easy to believe that her exhaustion and stress have affected her in this way, and even Lauren questions what she thought she saw.  She becomes more convinced as the novel progresses, however, and starts to take more drastic steps to keep her children safe, going as far as to lock herself away during the day, never leaving the house.

The only person who is open to hearing what Lauren has to say is DS Jo Harper, who isn’t sure what to believe, but who at least listens to Lauren as something niggles at her about the case from Lauren’s very first panicked 999 call in hospital.  Repeatedly told to leave it alone, Harper proves herself to be an officer who will do what she thinks is right, and tries to help Lauren where she can.  Harper is a great character, and comes across as being a bit cheeky while being very good at her job and I loved the chapters that are told from her perspective as she does what she can to investigate Lauren’s case on the sly.  She at least is sympathetic to Lauren’s case, and provides some much-needed support to Lauren when everyone else refuses to believe her.

Each chapter of Little Darlings begins with a snippet of folklore or fairy tale relating to twins and / or changelings, and I loved that these excerpts, which come from an admirably wide variety of sources, enhance the chilling nature of the novel, and which have clearly had an influence on Golding’s writing.  This is a psychological thriller with hints of the supernatural, and it’s a novel that I read in a single day as I desperately wanted to know Lauren’s fate, and that of her twins.  Highly recommended.

Make sure you check out the other bloggers on the tour: 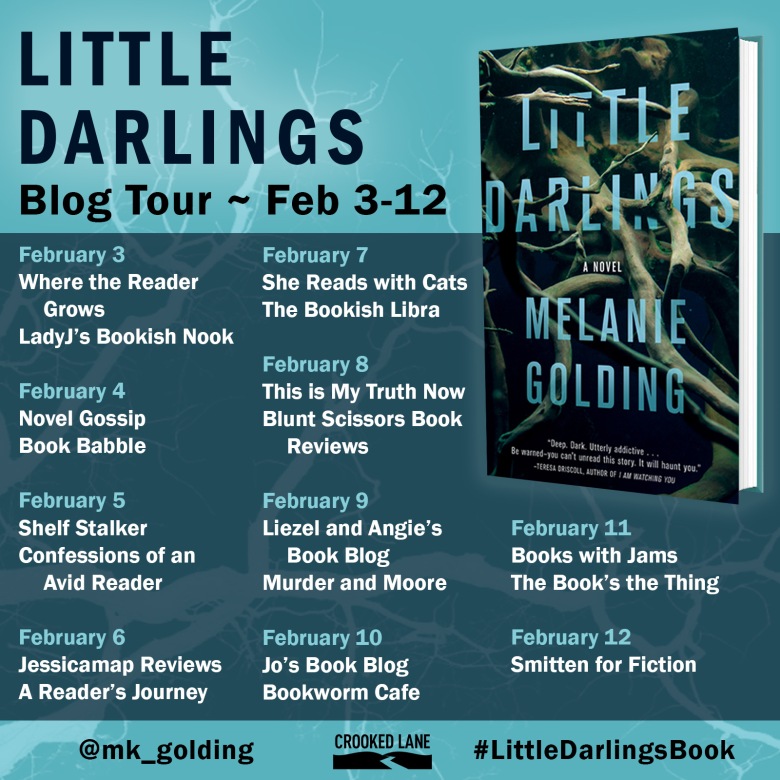