So, I said last week that my next book would be Margaret Atwood’s Hag-Seed.  Well, it wasn’t.  I read The Kind Worth Killing instead.  Great book, with some brilliant twists – full review to follow.

I looked at the pale, freckled hand on the back of the empty bar seat next to me in the business class lounge of Heathrow airport, then up into the stranger’s face.

Delayed in London, Ted Severson meets a woman at the airport bar.  Over cocktails they tell each other rather more than they should, and a dark plan is hatched – but are either of them being serious, could they actually go through with it and, if they did, what would be their chances of getting away with it?

Back in Boston, Ted’s wife Miranda is busy site managing the construction of their dream home, a beautiful house out on the Maine coastline.  But what secrets is she carrying and to what lengths might she go to protect the vision she has of her deserved future?

A sublimely plotted novel of trust and betrayal, The Kind Worth Killing will keep you gripped and guessing late into the night.

I’ve just started reading The Memory Chamber by Holly Cave, which I received via Netgalley.

YOU ARE GOING TO DIE.
YOU CAN PRESERVE A HANDFUL OF SPECIAL MEMORIES FOR EVER.
WHICH ONES WOULD YOU CHOOSE?

True death is a thing of the past.  Now you can spend the rest of eternity re-living your happiest memories: that first kiss, falling in love, the birth of your children, enjoyed on loop for ever and ever.

Isobel is a Heaven Architect, and she helps dying people create afterlives from these memories.  So when she falls for Jarek, one of her terminal – and married – clients, she knows that while she cannot save him, she can create the most beautiful of heavens, just for him.

But when Jarek’s wife is found dead, Isobel uncovers a darker side of the world she works within, and she can trust no one with what she finds…

The Memory Chamber is a thrilling and original story which vaults the reader into a world that is terrifyingly close to our own, where we can avoid everything we fear – even death itself.  But can we ever escape the truth?  Perfect for fans of Black Mirror.

Bearing in mind what I said earlier, you may not want to put too much stock in this, but my next read will probably be Beneath the Water by Sarah Painter. 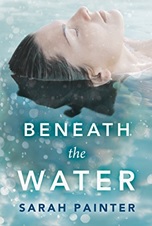 Munro House is the new start Stella needs. But it will also draw her back to a dark past…

Devastated by a broken engagement, Stella Jackson leaves her old life behind for a new start in rural Scotland. But when she arrives in the remote coastal village of Arisaig, nothing is what she expected.

At the edge of Arisaig sits Munro House; grand, imposing and said to be cursed by a string of tragic deaths.  No less intriguing is its eccentric and handsome young owner, Jamie Munro, who hires Stella as his assistant while he pursues a seemingly impossible aim.  Working through the great house’s archives, Stella soon finds herself drawn in by a cache of increasingly erratic letters from a young Victorian woman about her husband, Dr James Lockhart, a man whose single-minded ambition has strange parallels with Jamie’s.

Just as Stella begins developing feelings for Jamie, she discovers that the connection between the Lockharts and the Munros could have sinister repercussions for them both. She’s finally found the life she wants to live – but is it all an illusion?

And that’s my week in books! What are you reading this week?  Let me know! 🙂