The last book I finished reading was Rewind by Catherine Ryan Howard. To be honest, I didn’t really enjoy this, and I may not write a review for it. 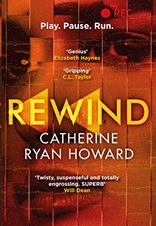 Andrew, the manager of Shanamore Holiday Cottages, watches his only guest via a hidden camera in her room. One night the unthinkable happens: a shadowy figure emerges onscreen, kills her and destroys the camera. But who is the murderer? How did they know about the camera? And how will Andrew live with himself?

Natalie wishes she’d stayed at home as soon as she arrives in the wintry isolation of Shanamore. There’s something creepy about the manager. She wants to leave, but she can’t – not until she’s found what she’s looking for…

This is an explosive story about a murder caught on camera. You’ve already missed the start. To get the full picture you must rewind the tape and play it through to the end, no matter how shocking…

My current read is Robopocalypse by Daniel H. Wilson. I started it yesterday on my commute, and I’m really enjoying it so far!

Roughly twenty years from now, our technological marvels unite and turn against us. A childlike but massively powerful artificial intelligence known as Archos comes online…and kills the man who created it. This first act of betrayal leads Archos to gain control over the global network of machines and technology that regulates everything from transportation to utilities, defence and communications.

In the early months, sporadic glitches are noticed by a handful of unconnected humans – from a senator and single mother disconcerted by her daughter’s “smart” toys, to a lonely Japanese bachelor, to an isolated U.S. soldier – but most are unaware of the growing rebellion until it is far too late. Then, in the span of minutes, at a moment known later in history as Zero Hour, every mechanical device in our world rebels, setting off the Robot War that both decimates and – for the first time in history – unites humankind.

I’m still struggling to stick to a plan, but maybe this week will be different?

I’m in the mood for something different next, so I might try I’ll Be Gone in the Dark which I’ve nothing but good things about.

The masterful true crime account of the Golden State Killer – the serial rapist turned murderer who terrorised California for over a decade – from the late Michelle McNamara.

I’ll Be Gone in the Dark offers a unique snapshot of suburban West Coast America in the 1980s, and a chilling account of the wreckage left behind by a criminal mastermind. It is also a portrait of one woman’s obsession and her unflagging pursuit of the truth, three decades later, in spite of the personal cost.

Updated with material which takes in the extraordinary events that followed its initial publication, Michelle McNamara’s first and last book is a contemporary classic – humane, haunting and heroic.

And that’s my week in books! What are you reading this week? Let me know in the comments! 😎