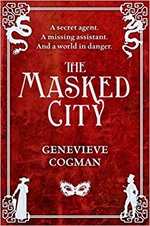 Librarian-spy Irene is working undercover in an alternative London when her assistant Kai goes missing. She discovers he’s been kidnapped by the Fae faction and the repercussions could be fatal. Not just for Kai, but for whole worlds.

Kai’s dragon heritage means he has powerful allies, but also powerful enemies in the form of the Fae. With this act of aggression, the Fae are determined to trigger a war between their people – and the forces of order and chaos themselves.

Irene’s mission to save Kai and avert Armageddon will take her to a dark, alternate Venice where it’s always Carnival. Here Irene will be forced to blackmail, fast talk, and fight. Or face death.

I really enjoyed The Invisible Library, and couldn’t wait to return to the fantastically bookish world that Cogman has created.  This second instalment is quite different to the first novel, although no less entertaining.  Rather than tracking down and trying to secure a rare tome for the Library, The Masked City sees Kai kidnapped and Irene on a desperate mission to find and rescue him.  His kidnapping has severe consequences, not just for Kai and Irene, but with whole worlds at stake.  This does mean that Kai isn’t such a prominent figure in this novel, and I have to admit that I missed the somewhat charged interactions between Irene and Kai.

Kai’s absence allows Irene to come more to the fore in this novel, and I enjoyed the reversal of stereotypical roles as Irene sets out to rescue him.  As a Librarian, Irene has no shortage of her own her skills, and while she might not have quite the same martial arts skill that Kai has displayed, she’s certainly not lacking in ability.  This quest will see Irene putting all of these skills to the test as she ends up in more than one sticky situation.  I’m a huge fan of Irene, and I love that – whatever her mission throws at her – she maintains her poise throughout.  Given that she’s operating alone for much of this novel, I felt that she showed more confidence, and I loved this progression of her character.  The reader still has insight into her own thoughts, and once again this adds a touch of humour to the novel.  I love her courage and determination, and the selflessness that she displays in rescuing Kai, consequences be damned.

While The Invisible Library introduced the world and concept, this second instalment gives more information on the non-human factions involved – the Fae and the Dragons in particular.  The two are sworn enemies, with Fae favouring chaos while the dragons revere order, and I enjoyed learning more about both sides.  The Library is neutral in its operations, aligning itself with neither faction, while us normal humans appear to be mere pawns for both – the Fae in particular.  It will be interesting to see how these two opposing sides act and react towards one another in future instalments, particularly as Kai’s kidnapping is enough to start a war.

The Masked City is another thrilling adventure with plenty of derring-do (I feel that Irene would approve of this phrase!), and I love the concept behind this series.  I can’t wait to read the next instalment, The Burning Page.