I’m delighted to be taking part in the blog tour for Pine by Francine Toon today.  This was one of my most eagerly awaited reads of the year, and it did not disappoint.

They are driving home from the search party when they see her. The trees are coarse and tall in the winter light, standing like men.

Lauren and her father Niall live alone in the Highlands, in a small village surrounded by pine forest. When a woman stumbles out onto the road one Halloween night, Niall drives her back to their house in his pickup. In the morning, she’s gone.

In a community where daughters rebel, men quietly rage, and drinking is a means of forgetting, mysteries like these are not out of the ordinary. The trapper found hanging with the dead animals for two weeks. Locked doors and stone circles. The disappearance of Lauren’s mother a decade ago.

Lauren looks for answers in her tarot cards, hoping she might one day be able to read her father’s turbulent mind. Neighbours know more than they let on, but when local teenager Ann-Marie goes missing it’s no longer clear who she can trust.

In the shadow of the Highland forest, Francine Toon captures the wildness of rural childhood and the intensity of small-town claustrophobia. In a place that can feel like the edge of the word, she unites the chill of the modern Gothic with the pulse of a thriller. It is the perfect novel for our haunted times.

Lauren is such an engaging character – unusually so for a ten-year-old.  She is full of the naivety of childhood but with the beginnings of adulthood on the horizon, and yet there is also a sense of her having to grow up too quickly as she is often left to fend for herself, or to rely upon the kindness of her friend’s parents to give her a hot meal.  Her mother disappeared when she was little more than a baby, and Lauren has no memories and few mementos of her.  Her father, Niall, refuses to discuss her mother or her disappearance.  Her questions – inconsequential or otherwise – are often met with exasperation from Niall, who doesn’t seem fully able to cope with the young girl he has to look after and provide for.  Lauren’s existence seems to be a lonely one as she has no siblings and few friends, and I think that readers will, at a minimum, sympathise with her, and more likely want to envelop her in a big hug!

That’s not to say that her father doesn’t care.  There are chapters told from Niall’s perspective that make it very clear that he does love his daughter, and there are many touching examples of this strewn throughout the novel.  He may not have the money to treat her often, but he does what he can, and his feelings are apparent to the reader, even if they are rarely shown.  With Niall, I get a sense of a person who is out of their depth but feels unable to ask for help from those who would gladly provide it – most likely from a sense of having to adhere to the traditional image of a man who doesn’t talk about or admit to his problems.  He doesn’t seem to have come to terms with his wife’s disappearance, and can often be found drowning his sorrows – and thoughts – in alcohol.

He buries all thoughts and all potential for thoughts.  He has become quite skilled at this over the years.

Pine is an incredibly atmospheric read, and Toon imbues the novel with a sense of otherworldliness, and the appearance of a woman around the town who no one can remember seeing shortly afterwards adds a touch of Gothic to the novel.  Pine is set in one of those small-town communities where there are few secrets, and the isolated and claustrophobic nature of the setting is added to by the deep forest which surrounds it, enhancing the tension and atmosphere that Toon so skilfully creates.

Pine is published by Doubleday on 23 January in hardback and digital formats.  Many thanks to the publisher and to Anne Cater for the early review copy and the opportunity to take part in the blog tour.

Make sure you check out the other wonderful bloggers taking part in the blog tour: 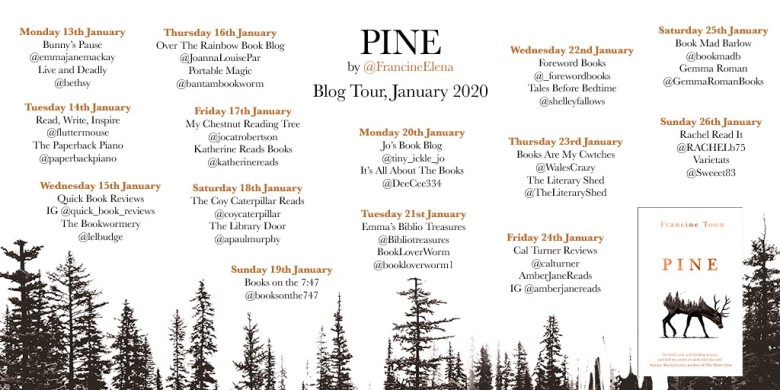