I have something a little different for you today, as I’m taking part in the blog tour to celebrate the titles shortlisted for The Goldsboro Books Glass Bell Award.

First, a little about the award:

Launched in 2017, the Goldsboro Books Glass Bell Award is awarded annually to an outstanding work of contemporary fiction, rewarding quality storytelling in any genre. The winner of the Glass Bell will receive £2,000 in prize money, and a handmade, engraved glass bell. The jury of ten consists of team members from Goldsboro Books, DHH Literary Agency and The Dome Press. There is no fee, or limit to the number of books that a publisher may submit, allowing both established and debut authors a chance to win. The inaugural winner was Chris Cleave, for his extraordinary Everyone Brave is Forgiven (Sceptre), the moving and unflinching novel about the profound effects that the Second World War had on ordinary citizens back at home in Britain. Last year, the award went to John Boyne for his sweeping, poignant and comedic odyssey of post-war Ireland, The Heart’s Invisible Furies (Transworld).

The six shortlisted titles for the 2019 award are: 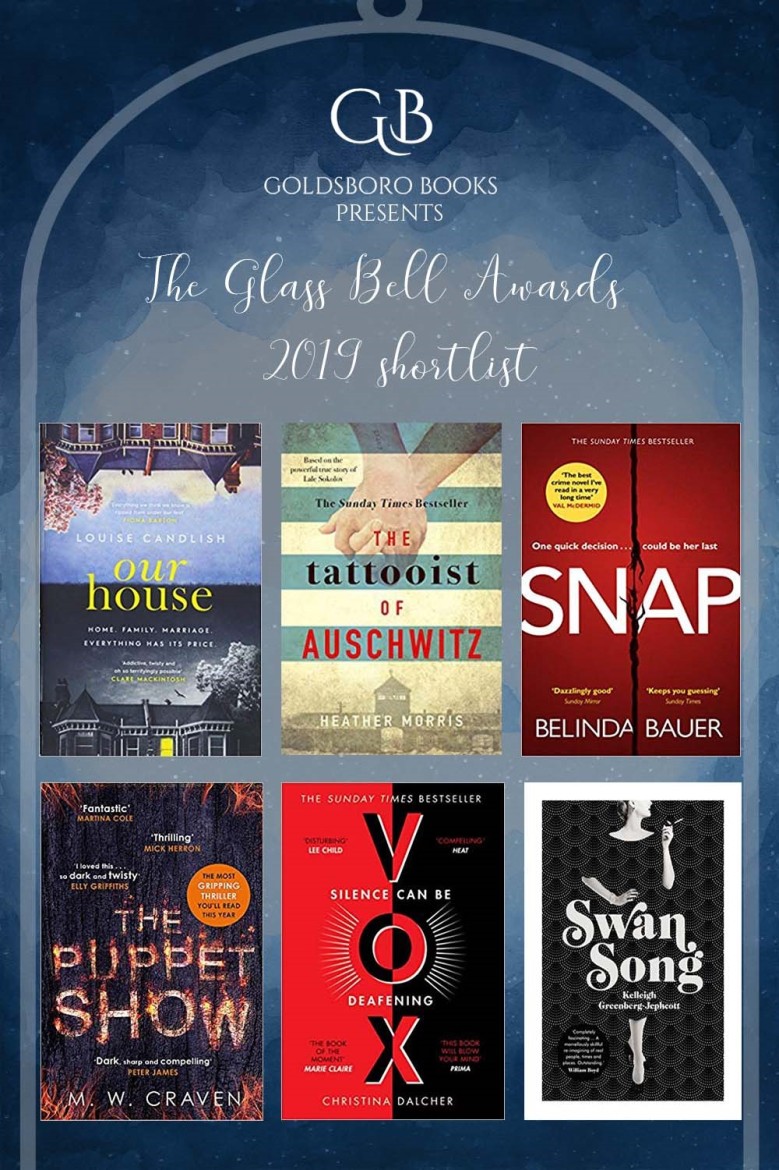 As part of the tour, I’m celebrating the absolutely stunning VOX by Christina Dalcher, and I’m delighted to be re-posting my review of this fantastic debut.

VOX is a novel that takes the idea of “seen but not heard” to extremes as women and girls are fitted with a monitor that counts their words, limiting them to 100 per day.  The penalty for exceeding that limit?  Electric shocks that increase in magnitude the more they exceed their limit.  Of course, this isn’t the only way in which women are limited.  No longer able to work, they are expected to stay at home and take care of the house, preparing a meal for their husbands and children.  In schools, girls are taught home economics and “Simple Accounting for Households”, anything other than household management skills deemed unnecessary.

one day my daughter will be expected to shop and to run a household, to be a devoted and dutiful wife.

The reader enters this world around a year after these restrictions on women were implemented, and it doesn’t take long to understand that they have been relegated to a medieval world in which they have no power or status, and not even a voice with which to share their anger and frustration at the injustice.

For Doctor Jean McClellan, an expert in neurolinguistics, this is particularly frustrating.  On the point of making a breakthrough in her field, her work was halted as women were made to stop working.  Jean is a fantastic character, and one with whom it’s very easy to sympathise.  She’s an intelligent woman, and she chafes at the restrictions placed upon her.  One thing I found interesting was that not all women in the novel feel the same way.  There are those that have bought into the propaganda, and who fully support the changes that have been made.  I thought that this added an interesting dimension to the novel, and it wasn’t something that I expected.

Jean is married and has four children – three boys and one girl.  I thought that it was particularly heart-breaking for Jean to see her daughter adapt to the new world, withdrawing into herself, while her eldest son begins to accept and repeat the propaganda that is now taught in boys’ schools.  Her husband is also a source of irritation, as he seems to respect his wife and her accomplishments, yet also seems quite prepared to go along with the new way of things.  It’s easy to understand Jean’s resentment of her family, even her son who she clearly loves, as she sees him being indoctrinated by the Christian fundamentalists who have instigated these restrictions on women.  Of course, it wouldn’t be much of a novel if something didn’t happen to shake things up a bit, and the source of this was quite unexpected.  I won’t go into the details, but it allows Jean a little more freedom, and I enjoyed the shift in the plot, wondering where it would go.

A lot of books are compared to The Handmaid’s Tale, but I think that this is one of the few that is deserving of that accolade.  I thought that Dalcher was very clever in showing how easy it was for those in power to make these changes, and is perhaps giving the reader a warning, in that the signs were there for Jean and her peers, but not enough people did anything about it until it was too late.  I think that this is perhaps the scariest element of the novel, the ease with which the new measures were brought into force, and that are then so difficult to reverse.

The winner of the Glass Bell Award will be announced on 16 September – congratulations to all the shortlisted authors, and good luck!