I’m delighted to be taking part in the blog tour for Last Ones Left Alive, the debut novel from Sarah Davis-Goff.  I love dystopian and post-apocalyptic fiction, and so I was thrilled to be offered the chance to read this ahead of its release last week.

Raised by her mother and Maeve on Slanbeg, an island off the west coast of Ireland, Orpen has a childhood of love and stories by the fireside. But the stories grow darker, and the training begins. Ireland has been devoured by a ravening menace known as the skrake, and though Slanbeg is safe for now, the women must always be ready to run, or to fight.

When Maeve is bitten, Orpen is faced with a dilemma: kill Maeve before her transformation is complete, or try to get help. So Orpen sets off, with Maeve in a wheelbarrow and her dog at her side, in the hope of finding other survivors, and a cure. It is a journey that will test Orpen to her limits, on which she will learn who she really is, who she really loves, and how to imagine a future in a world that ended before she was born.

Last Ones Left Alive alternates between the past and the present allowing the reader to see Orpen’s childhood on Slanbeg, as well as her current mission to find a cure for Maeve before she becomes a skrake.  Growing up on Slanbeg, she had only her mother, Muireann, and her mother’s companion, Maeve, for company.  While it wasn’t much of childhood by most standards, she was at least safe, loved, and looked after, and their island home was never disturbed.  As soon as she is old enough, she begins to train – running and swimming to build stamina as well as knife-throwing and hand-to-hand combat training to give her the skills and strength to protect herself.  I loved these chapters, which intertwine nicely with the present-day storyline, giving context and providing the necessary background on Orpen, Maeve, and how she got into her current situation.  These chapters give a sense of Orpen’s character as well as her upbringing, and I loved her rebellious nature and indomitable spirit.  Her desire to leave Slanbeg also becomes apparent, and she begins to chafe against the restrictions placed on her, not fully understanding what she is being kept safe from.

In the present day, the reader finds Orpen on the road, her wish of leaving Slanbeg fulfilled.  For company, she has a dog, Danger, and Maeve, recently bitten by a skrake, and the reader joins Orpen as she searches desperately for Phoenix City and a cure for Maeve.  The skrakes are a zombie-like creature, dead and decaying, yet very much mobile, and exhibiting the speed, strength, and hunger that one might associate with such creatures.  Once bitten, a person will become a skrake in a matter of days, and Orpen is conscious of time running out for Maeve.  The present-day chapters show the need for the training she was put through, with each skrake encounter testing both her skills and her willpower.  These chapters give more insight into the world as it now, with towns abandoned and nature claiming back the streets.  There are few people left, and the reader is given little insight into what caused the end of civilisation, and whether it came before or after (and because of) the skrakes.  There are small hints, and it’s possible to deduct that things have been this way for some time, since before Orpen’s birth, and while it can be interesting to see “the end”, I don’t think it is essential for this kind of novel.

Of course, skrakes aren’t the only danger, and Orpen’s head is filled with warnings and lessons learnt from Muireann and Maeve.  “Beware tall buildings” (which might be ready to collapse) and “beware of men” (no explanation needed) become mantras to Orpen.  It’s inevitable that she meets another group of people, and she is initially afraid, particularly of Cillian, who is travelling with the pregnant Nic and her daughter, Aodh.  I got the feeling that while Orpen knew that she should be wary of men, that she wasn’t fully aware of the reasons for this, although to the reader it is obvious.  It’s a reminder that she is still young and naïve in some respects.

Her isolated background is never more apparent than when faced with other people, particularly as she becomes increasingly frustrated at the lack of training and preparation to survive exhibited by Cillian, Nic, and Aodh.  She judges them without knowing their history, although this becomes clearer later in the novel.  It is through Nic and Cillian that the reader learns more about the world in which Last Ones Left Alive is set, and the options available to women:

The women have the two options, and they’re not good ones… Breeders and banshees

The banshees are something of a warrior caste, hunting the skrake and protecting those left alive, while the concept of a breeder needs no such explanation.  I found it wonderfully refreshing that the woman we meet in this novel are all strong.  Orpen, Muireann, Maeve, and Nic show great strength, albeit in different ways, and Cillian proves to be a great character.  While I love this kind of novel, it was refreshing to move away from some of the standard plot devices often found in them.

Last Ones Left Alive is bound to draw comparisons to McCarthy’s The Road, and it does portray a similar level of bleakness, which, as you know, is one of favourite adjectives for such novels.  It’s fantastically written, and I loved the subtle hints of Irish brogue throughout.  Highly recommended for those looking for a post-apocalyptic novel with a strong female cast.

Last Ones Left Alive was published by Tinder Press on 7 March.  Many thanks to Georgina Moore for the early review copy, and to Anne Cater for the opportunity to join the blog tour. 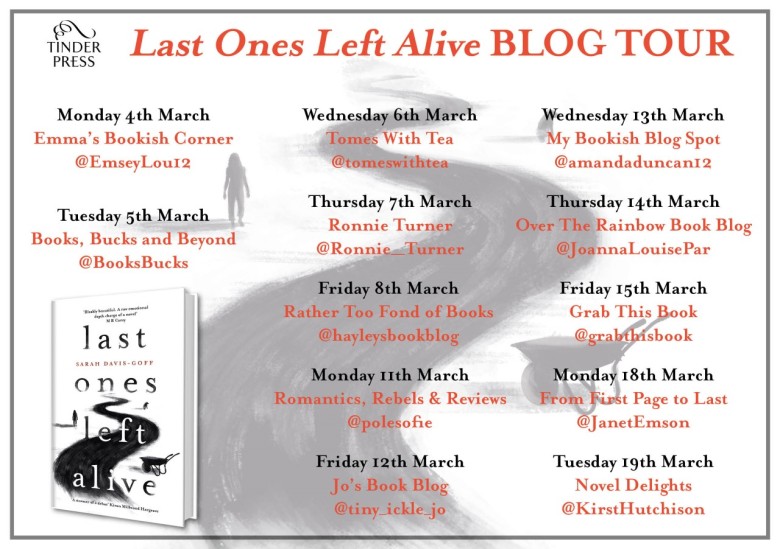