I’m delighted to be taking part in the blog tour for Once Upon a River by Diane Setterfield today.  I adored The Thirteenth Tale and Bellman & Black, and I’ve been waiting (not so) patiently for a new novel from Setterfield for some time.  It was worth the wait, as Once Upon a River is an absolute treat.

A dark midwinter’s night in an ancient inn on the Thames. The regulars are entertaining themselves by telling stories when the door bursts open on an injured stranger. In his arms is the drowned corpse of a little child.

Hours later the dead girl stirs, takes a breath and returns to life.

Is it a miracle?

Or can it be explained by science?

An exquisitely crafted multi-layered mystery brimming with folklore, suspense and romance, as well as with the urgent scientific curiosity of the Darwinian age, Once Upon a River is as richly atmospheric as Setterfield’s bestseller The Thirteenth Tale.

The story of Once Upon a River is deceptively straightforward.  On the winter solstice, a man, badly injured, stumbles into an inn on the Thames carrying in his arms a small girl.  Rita Sunday – local nurse and midwife – is brought to The Swan, but it’s apparent to everyone that the little girl, whoever she is, is dead.  Until she takes a breath and returns to life.  The story spreads quickly, and three possible identities for the child are established.  Is she Amelia Vaughn, kidnapped from her room two years earlier?  Is she Alice Armstrong, whose mother committed suicide?  Or is she Ann, the sister of Lily White?  The little girl in question does not speak, and goes home with the Vaughns, although her identity is far from resolved.  It is a question that proves difficult to answer, and this is a story with its fair share of drama in determining the identity of the child, as well as what happened to those other children.

Once Upon a River is filled with a fantastic cast of characters, and there are so many that I did initially struggle to keep them apart.  It soon becomes apparent who the key players are, however, and I loved the depth to which each character was explored.  This novel is an ode to storytelling, and each character has their own story to share throughout the tale.  I particularly loved the down to earth Rita Sunday, with her strong belief in science and reason (she has studied medicine, after all), as well as Robert Armstrong, farm owner and grandfather to the missing (possibly found) Alice, who has experienced more than his fair share of prejudice, yet remains such a loving, caring individual despite the trials and racial abuse he’s faced.

As soon as I started reading Once Upon a River, I knew that I was in for a treat.  This is a novel to get lost in and one that, like the river at its heart, won’t be rushed, but will go at its own pace.  I loved the way that the story unfolded, gradually revealing more information as Rita and Daunt, the man who started the story as he stumbled into The Swan with the girl in his arms, continue to ponder the girl’s identity.  There is no big “ta-dah!” moment, but the novel comes to a satisfying conclusion, with the many questions raised throughout the novel answered by the final page.

Once Upon a River is a novel that defies easy categorisation.  It is a mystery, an historical fiction, it combines both the scientific developments of the age with the folklore and beliefs of the time, and is a little Dickensian in feel.  It is uniquely wonderful and, as fans of Setterfield’s will already expect, beautifully written.  This is, without a doubt, one of my favourite books of the year.

Once Upon a River is published by Doubleday, and is available in digital formats from 4 December and in hardback from 17 January 2019.  Many (many!) thanks to Anne Cater for the opportunity to join the Random Things Bog Tour, and to Alison Barrow and Doubleday for the early copy.

Make sure you check out the other wonderful bloggers taking part in the blog tour: 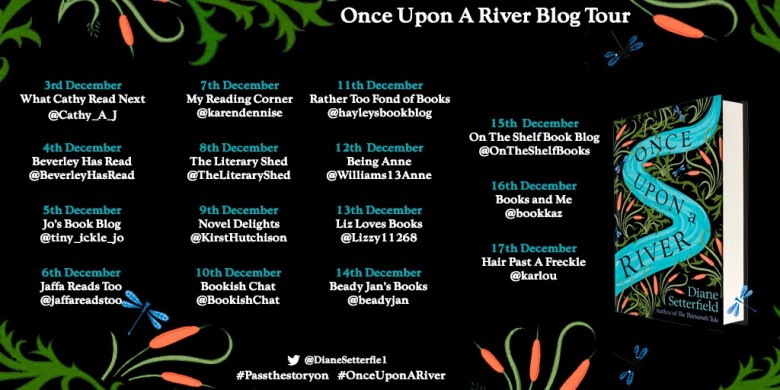