The last book I finished reading was Melmoth by Sarah Perry which I really enjoyed.  Now I just need to find the words to review it!

Twenty years ago Helen Franklin did something she cannot forgive herself for, and she has spent every day since barricading herself against its memory. But her sheltered life is about to change.

A strange manuscript has come into her possession. It is filled with testimonies from the darkest chapters of human history, which all record sightings of a tall, silent woman in black, with unblinking eyes and bleeding feet: Melmoth, the loneliest being in the world. Condemned to walk the Earth forever, she tries to beguile the guilty and lure them away for a lifetime wandering alongside her.

Everyone that Melmoth seeks out must make a choice: to live with what they’ve done, or be led into the darkness. Helen can’t stop reading, or shake the feeling that someone is watching her. As her past finally catches up with her, she too must choose which path to take.

Exquisitely written, and gripping until the very last page, this is a masterpiece of moral complexity, asking us profound questions about mercy, redemption, and how to make the best of our conflicted world.

While attending a crime scene on the outskirts of Maidstone, DI Kay Hunter makes a shocking discovery.

The victim has been brutally cut to pieces, his identity unknown.

When more body parts start turning up in the Kentish countryside, Kay realises the disturbing truth – a serial killer is at large and must be stopped at all costs.

With no motive for the murders and a killer who has gone undetected until now, Kay and her team of detectives must work fast to calm a terrified local population and a scornful media.

When a third victim is found, her investigation grows even more complicated.

As she begins to expose a dark underbelly to the county town, Kay and her team are pulled into a web of jealousy and intrigue that, if left unchecked, will soon claim another life.

My next read will probably be The Swooping Magpie by Liza Perrat. 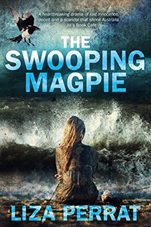 The thunderclap of sexual revolution collides with the black cloud of illegitimacy.
Sixteen-year-old Lindsay Townsend is pretty and popular at school. At home, it’s a different story. Dad belts her and Mum’s either busy or battling a migraine. So when sexy school-teacher Jon Halliwell finds her irresistible, Lindsay believes life is about to change.

Lindsay and Jon pursue their affair in secret, because if the school finds out, Jon will lose his job. If Lindsay’s dad finds out, there will be hell to pay. But when a dramatic accident turns her life upside down, Lindsay is separated from the man she loves.

Events spiral beyond her control, emotions conflicting with doubt, loneliness and fear, and Lindsay becomes enmeshed in a shocking true-life Australian scandal. The schoolyard beauty will discover the dangerous games of the adult world. Games that destroy lives.

Lindsay is forced into the toughest choice of her young life. The resulting trauma will forever burden her heart.

Reflecting the social changes of 1970s Australia, The Swooping Magpie is a chilling psychological tale of love, loss and grief, and, through collective memory, finding we are not alone.

And that’s my week in books! What are you reading this week?  Let me know in the comments! 😎