Virginia Wrathmell knows she will walk on to the marsh one New Year’s Eve, and meet her end there.

One snowy New Year’s Eve, at the age of eighty-six, Virginia feels the time has finally come.

New Year’s Eve, 1939.  Virginia is ten, an orphan arriving to meet her new parents at their mysterious house, Salt Winds.  Her new home sits on the edge of a vast marsh, a beautiful but dangerous place.  War feels far away out here amongst the birds and shifting sands – until the day a German fighter plane crashes into the marsh.  The people at Salt Winds are the only ones to see it.

What happens next is something Virginia will regret for the next seventy-five years, and which will change the whole course of her life.

Call of the Curlew is a novel that had me hooked from the very first page.  Who is Virginia Wrathmell, and why is she so certain that she would meet her end on the marsh?  The first of these questions was answered earlier than the second, as the reader gets to know Virginia both now (in 2015) and as a child at the outset of the Second World War.  Both storylines reveal much about her, although I did prefer the earlier sections as the reader begins to understand the burden that she has carried throughout her life.  What this is takes some time to be fully revealed, and I couldn’t turn the pages quickly enough to find out what had gone so horribly wrong.

As an orphan, it would be easy to assume that her childhood was an unhappy one, and yet that doesn’t seem to be the case here.  The orphanage was kind to her prior to her adoption by Clem and Lorna, and her adoptive parents treat her well, even if Lorna doesn’t exactly exude maternal instinct.  I loved the way her relationship with Clem developed into something that’s not quite father and daughter, but close enough to be enjoyable for them both.  The other characters in the novel are also well-developed, particularly the ever present yet rarely welcome neighbour, Max Deering, and it’s no surprise that he has his role to play in what comes to follow.

I found the present-day storyline to be extremely thought-provoking, as Virginia seeks to wrap up loose ends before heading out into the marsh.  Things don’t entirely go to plan, however, as she has an unexpected visitor, and one that has her own links to Virginia’s past, stirring up more memories.  Whilst this might seem coincidental, I thought that this development was explained well, and I thought that this was a brilliant way of sharing the outcome for other characters in the novel, without resorting to Virginia simply telling the reader what happened.

The dual timeline means that this is a novel that will appeal to those who enjoy historical fiction, and the mystery which slowly unravels will keep you hooked until the end.  It’s not a fast-paced novel, but I thoroughly enjoyed the slow unravelling of events.  Call of the Curlew is brilliantly written and atmospheric throughout and is imbued with a fantastic sense of place, so much so that the marshes almost seem like a character in themselves, and I liked the constant they provided in the story whilst everything else changes over time.  This is a poignant story, and one that will stay with me for some time.

Call of the Curlew was published by Doubleday on 28 June.  Many thanks to Anne Cater and Hannah Bright for the review copy and the opportunity to join the blog tour. 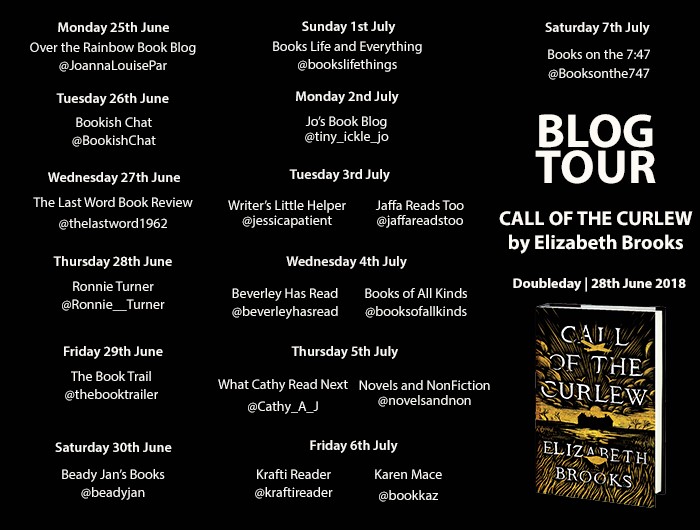