That doesn’t actually sound like great progress for 18 hours, does it?  I have to confess, I took a break last night to watch the GB Ice Hockey game against Hungary (woo hoo!) and I had to get some sleep!

Into the Water by Paula Hawkins 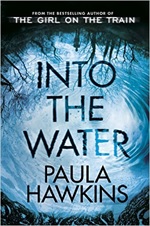 In the last days before her death, Nel called her sister. Jules didn’t pick up the phone, ignoring her plea for help.

Now Nel is dead. They say she jumped. And Jules has been dragged back to the one place she hoped she had escaped for good, to care for the teenage girl her sister left behind.

But Jules is afraid. So afraid. Of her long-buried memories, of the old Mill House, of knowing that Nel would never have jumped.

And most of all she’s afraid of the water, and the place they call the Drowning Pool…

The Death House by Sarah Pinborough

Toby is a boy who has forgotten how to live.
Clara is a girl who was born to die.

Taken from his family, Toby now lives in the Death House. Isolated from the outside world the inhabitants of are watched for any signs of a mysterious illness…

Clara was a girl who had everything. Adored by her friends and her family, her life was destined for greatness. Now, Clara is the newest resident of the Death House and she’s determined not to allow her life to end there.

This is Toby and Clara’s story.