November 2017 marks the one year anniversary of the Ninja Book Box, and having been one of the backers of this initiative on Kickstarter, I couldn’t resist the first year anniversary box, particularly with the theme of “Into the Future” was revealed, which plays to my interests.

I choose the mini box, which proved to be overloaded with goodies for Ninja Book Box’s first birthday.

I always leave the book until last, so I’ll start with the goodies that were included.  The first items I came across were a set of items from Fox Spirit Books, which included a mirror, a bottle opener, and a pin badge.  The mirror is a perfect size to chuck in your bag when heading out, and I don’t think I’ve left home without it since I got it!

The second item I came across was an ozone, citrus, and sea glitter soap from Geeky Clean, which sounds absolutely lovely!

Also in this box was a Ninja mask, which came with the following instructions:

I did put the mask on when it arrived, but my other half didn’t look too impressed, so I quickly took it off again!  Now to put it on and jump out at him when he’s not expecting it… 😉

And now for the book.  As Ninja Book Box began on Kickstarter, the book chosen for this month’s box was also a Kickstarter project: 2084 published by Unsung Stories. 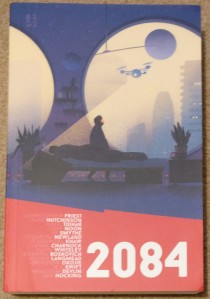 Fifteen predictions, seventy years in the future. By 2084 the world we know is gone. These are stories from our world seven decades later.

In 1948 George Orwell looked at the world around him and his response was 1984, now a classic dystopian novel. Here fifteen writers asked themselves the same question as Orwell did – where are we going, and what is our future?

Visit the dark corners of the future metropolis, trek the wastelands of all that remains. See the world through the eyes of drones. Put humanity on trial as the oceans rise. Say goodbye to your body as humanity merges with technology.

Warnings or prophesies? Paradise or destruction? Will we be proud of what we have achieved, in 2084?

Our future unfolds before us.

The risk of including a novel that began as a Kickstarter project is that buyers of the box will have also backed the Kickstarter project, and so it proved to be the case for me!  However, I can’t honestly complain too much, as I now have two versions of the cover with the view from inside the window as well as outside! 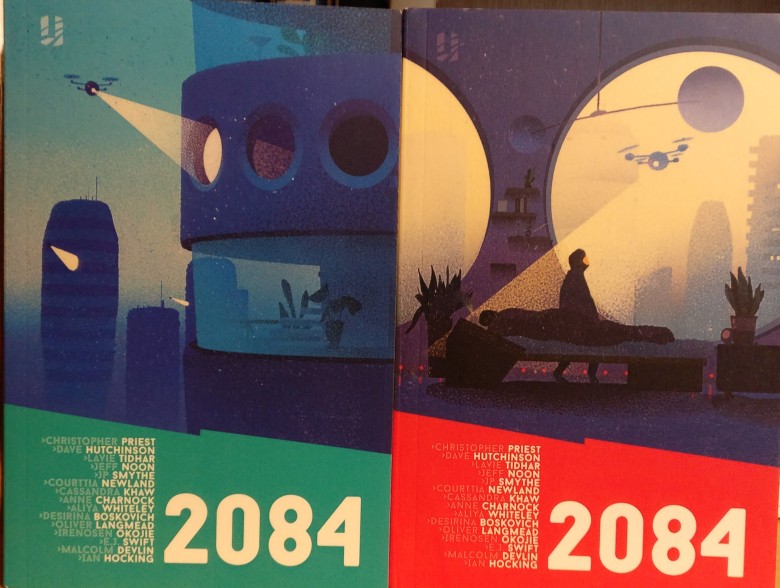 I think that this mini box was excellent value for money given the book and the gifts included, and I can’t wait to see what the theme for the next box is!