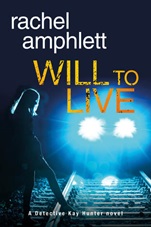 Will to Live is the second novel in the DS Kay Hunter series by Rachel Amphlett, and follows on from Scared to Death.  You can see my review of Scared to Death here, as well as a Q&A with Rachel.  I have to admit that Rachel very kindly sent me a digital copy of Will to Live in March (!), but I’ve only just got around to reading and reviewing it.  Apologies, Rachel!

When a packed commuter train runs over a body on a stretch of track known to locals as ‘Suicide Mile’, it soon transpires that the man was a victim of a calculated murder.

As the investigation evolves and a pattern of murders is uncovered, Detective Sergeant Kay Hunter realises the railway’s recent reputation may be the work of a brutal serial killer.

With a backlog of cold cases to investigate and attempting to uncover who is behind a professional vendetta against her, Kay must keep one step ahead of both the killer and her own adversaries.

When a second murder takes place within a week of the first, she realises the killer’s timetable has changed, and she’s running out of time to stop him…

I read the synopsis of Will to Live when Rachel first sent me a copy, but I went in blind having completely forgotten what it was about, and unwittingly started reading this on a long train journey, which made for a slightly surreal experience!

Set a short time after the events in Scared to Death, Will to Live sees Kay Hunter and her team investigating an apparent suicide, which very quickly becomes a murder investigation and a race against time to stop a serial killer in his tracks (sorry) before he kills again.  As if this isn’t enough, Hunter has also begun to investigate a previous case which resulted in her temporary suspension and a professional standards investigation.  Whilst she was exonerated, it has had a lasting impact, not least because one of her superior officers, DCI Larch, no longer trusts her, and has prevented her from being promoted as a result.

I love the characterisation in these novels.  All are detailed sufficiently for their level of involvement, and Kay is a wonderful, complex character that you want to cheer on, and to stand up for when Larch is having a dig at her, which he does whenever he’s in the same room as her.  I also really enjoy the relationship she has with her partner, Adam, and I love the slightly comedic scenes between the two, particularly when he brings his work home with him, which, given he’s a vet, has resulted in some slightly unusual visitors in their house!  I think it’s really refreshing to see that their unusual working hours don’t cause any rifts between them, and to see that they are happy together.

As with Scared to Death, Amphlett has an absolutely killer (pun intended) opening chapter.  It’s incredibly tense, and sets the reader up for an exciting, fast paced read that will leave you wanting more.  Luckily, book 3 – One to Watch – is out now (and I’ll be reviewing it within the next few days) and book 4 – Hell to Pay – is out in November.  As the second novel in the series, this could be read as a standalone, but I do think that you will get more out of it by reading Scared to Death first.  You will have a better understanding of the characters, and whilst the main cases aren’t linked, there is the backstory which flows through both.

Many thanks to Rachel for providing a digital copy, and apologies again that it’s taken me so long to get to it!