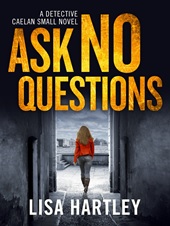 I recently finished reading Broken Branches by M. Jonathan Lee, which I really enjoyed – my review will be up soon!

‘Family curses don’t exist. Sure, some families seem to suffer more pain than others, but a curse? An actual curse? I don’t think so.’

A family tragedy was the catalyst for Ian Perkins to return to the isolated cottage with his wife and young son. But now they are back, it seems yet more grief might befall the family.

There is still time to act, but that means Ian must face the uncomfortable truth about his past. And in doing so, he must uncover the truth behind the supposed family curse.

I’m currently reading Gather the Daughters by Jennie Melamed – I’ve heard only good things about this one so far and, about half way in, I can see why.

Gather the Daughters tells the story of an end-of-the-world cult founded years ago when ten men colonised an island. It’s a society in which men reign supreme, breeding is controlled, and knowledge of the outside world is kept to a minimum. Girls are wives-in-training: at the first sign of puberty, they must marry and have children. But until that point, every summer, island tradition dictates that the children live wildly: running free, making camps, sleeping on the beach. And it is at the end of one such summer that one of the youngest girls sees something so horrifying that life on the island can never be the same again.

I’m not entirely sure what my next read will be, but it’s probably going to be Ask No Questions by Lisa Hartley as I’m on the blog tour next week:

Some secrets were meant to stay hidden… Trust no-one

After an operation goes badly wrong, undercover specialist Detective Caelan Small leaves the Metropolitan Police for good. Or so she thinks. Then the criminal responsible is seen back in the UK.

Soon Caelan is drawn back into a dangerous investigation. But when the main lead is suddenly murdered, all bets are off. Nothing is as it seems. Everyone is a suspect – even close colleagues.

Someone in the Met is involved and Caelan is being told to Ask No Questions.

That isn’t an option: Caelan needs answers… whatever the cost.

And that’s my week in books!

As an aside, things have been a little quieter than usual on Jo’s Book blog recently, as I started a new job last week.  Same company, but a different role, and between getting up to speed with things and that inevitable period of working 1.5 jobs, I just haven’t had as much time to read / blog / blog share as I would like.  Normal service will resume shortly!