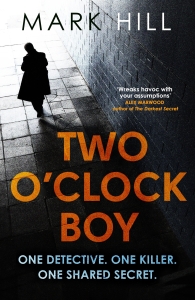 I reviewed Two O’Clock Boy in September 2016 prior to the eBook launch, and I’m reposting my review as part of the blog tour for the paperback release this month.

In the 1980s, Longacre Children’s Home gave the outward appearance of being a place for homeless children to grow up in relative comfort and safety.  But beneath the façade, the children lived in fear of the manager, Gordon Tallis.

Thirty years later, and the investigation into the brutal murder of Kenny Overton and his family causes newly promoted DS Felicity (Flick) Crowley to investigate a potential link to the home where Kenny was a resident as a child.

Despite DI Ray Drake’s insistence that she focus on Kenny’s somewhat unwholesome past as a petty criminal, she can’t help but dig deeper.  Is there a connection between Kenny’s recent demise and a string of supposed accidents and suicides that have plagued the former residents of Longacre?  And if so, are there more to come?

Two O’Clock Boy comes with quite a hook:

One became a detective

One became a killer…

Given the two very different outcomes – the detective versus the killer – I think that it’s easy to assume that Two O’Clock Boy is a good vs. evil tale, and that wasn’t the case at all.  Drake is an incredibly murky character who is in a horrible position.  I won’t say too much as I’d hate to spoil the novel for other readers, but whilst Drake is desperate to stop the murderer, he is also willing to sacrifice the investigation to suit his own purposes.

This is made increasingly more difficult by the tenacious “Flick” Crowley.  Newly promoted to Detective Sergeant, Flick feels the need to prove her worth, and so it’s a little surprising (and thoroughly pleasing) when she continues to follow her instincts and investigates the possible link to the children’s home, despite Drake’s increasingly disturbing behaviour.

The story is told in the present day with flashbacks to the 80s, and the experience of the children in Longacre.  Whilst some of what goes on there is stated, there is more implied.  I was quite pleased that Hill chose to draw the line that he did, however.  I’ve never shied away from gruesome / unpleasant reading material, but I think that too many authors try to shock their audience when it isn’t necessary, and I liked that Hill didn’t succumb to that.

This is a novel with plenty of twists, although I did work out who the killer was and much of what was going quite early on.  I still enjoyed the novel, however, and I kept reading this fast-paced thriller to see how all the loose ends would be tied up.  I can see this becoming a bestseller, and I would recommend it to all crime / thriller fans – it’s a fantastic, gritty debut with some of the murkiest characters you’ll come across.

Two O’Clock Boy is available now in digital and paperback.  Many thanks to Ella Bowman for inviting me to take part in the blog tour!