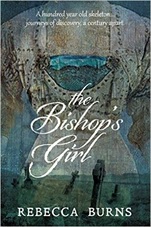 Jess works as a researcher at the Shacklock Library in Jedthorpe, Yorkshire.  The library is named after a prominent bishop from the area – Anthony Shacklock – who died in 1917 in France whilst assisting at a hospital looking after injured soldiers.

For the past six years, Jess has supported Professor Waller, who has dedicated much of his career to identifying a young woman, estimated to be around 17 years of age at the time of her death, who was found in Shacklock’s grave when his remains were removed from France to Jedthorpe.  She has no name, although DNA testing indicates a familial relationship to the bishop.

Jess is forced to balance her demanding job with an even more demanding home life, looking after her two children and worrying over the ever-increasing distance between her and her husband, Alec.

When a new snippet of information comes to light, it sends Jess on a journey that will have much more of an impact on her life than she ever expected.

I really liked Jess, and felt a great deal of sympathy for her.  At work, Waller takes advantage of her, often asking her to make the long journey to London to look in various archives at short notice and with no consideration of the impact on Jess and her family.  She gets no thanks for the work she undertakes and Waller takes all the credit, having done none of the leg work himself.  It’s infuriating, and I really enjoyed Jess’s gradual progression from resigned acceptance to open rebellion as she becomes utterly fed up with the situation.

Having accepted the situation for the last 6 years, the reader might wonder what has prompted the sudden change in character.  Jess’s home life is little better than her work life – she and her husband have been drifting apart, and are no longer able to talk to each other without arguing.  He resents any time she is away from home – especially the late evenings and weekends, at least partly because it means he has to look after the children.  But Jess finds a new lease of life when her best friend, Marie, suggests that she meets up with her grown up son, Hayden, who at 28 is 13 years younger than Jess, on one of her visits to London, never expecting that the two would end up in bed following a few drinks!  Jess goes through various feelings of guilt and excitement at her actions, but it does give her some spark as she becomes increasingly drawn to Hayden.  It’s as though she’s woken from a long sleep, and I loved the new spirit this gave her.

Whilst being something of a love story, there is also an historical element as the reader follows Jess’s investigations into the identity of the unknown girl buried with Shacklock.  This was my favourite part of the novel – the slow gathering of clues, the peaks and troughs as new lines of enquiry lead to something or nothing, and I thought that this was particularly well done.  Initially told from the perspective of Jess, part two of the novel moves back in time, and the reader sees what happened (which I won’t share!) as it happened.  I really liked this change in perspectives, and I thought it worked really well in the novel.

There are a couple of little twists here, although I did guess them before the end of the novel.  That said, I think that this is a novel where the journey is more important than the destination, and so this didn’t reduce my enjoyment at all.  If anything, I quite liked getting to the end and being able to say “Yes!  I knew it!”.  I did have a few outstanding questions at the end of the novel, although these were along the lines of “but I want to know what happens next” rather than relating to elements within the story that didn’t make sense or that I felt needed additional clarification.

The Bishop’s Girl is a highly enjoyable read, and one that I would recommend to those looking for something a little different, combining as it does the historical and the romance elements.

The Bishop’s Girl is available as an eBook and in paperback.  Many thanks to Rebecca Burns for providing a copy for review.