Heading into the final stretch of this readathon, and I’ve finished my planned reading list!  I think I’ll be able to sneak in one more short novel before the end…

In an attempt to perk me up in the nighttime hours, I tried reading some short stories.  It didn’t help to keep me awake, and so I did sneak off to bed for a short snooze! 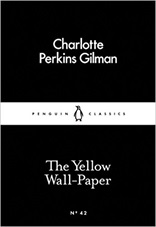 The color is hideous enough, and unreliable enough, and infuriating enough, but the pattern is torturing.

Written with barely controlled fury after she was confined to her room for ‘nerves’ and forbidden to write, Gilman’s pioneering feminist horror story scandalised nineteenth-century readers with its portrayal of a woman who loses her mind because she has literally nothing to do. 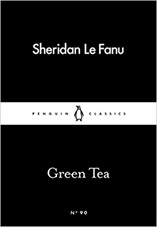 A ghastly groan and a shudder…

From the pioneer of horror fiction, this tale of a clergyman tormented by a demonic creature is one of the greatest Victorian ghost stories.

The hair stands up on the back of my neck and I get an age-old feeling in my belly. Like there’s a fight ahead. Like something’s really about to go off…

After convicting a superior for corruption and shooting off a gangster’s crown jewels, the career of Hamburg’s most hard-bitten state prosecutor, Chastity Riley, has taken a nose dive: she has been transferred to the tedium of witness protection to prevent her making any more trouble. However, when she is assigned to the case of an anonymous man lying under police guard in hospital – almost every bone in his body broken, a finger cut off, and refusing to speak in anything other than riddles – Chastity’s instinct for the big, exciting case kicks in.

Using all her powers of persuasion, she soon gains her charge’s confidence, and finds herself on the trail to Leipzig, a new ally, and a whole heap of lethal synthetic drugs. When she discovers that a friend and former colleague is trying to bring down Hamburg’s Albanian mafia kingpin single-handedly, it looks like Chas Riley’s dull life on witness protection really has been short-lived…

Fresh, fiendishly fast-paced and full of devious twists and all the hard-boiled poetry and acerbic wit of the best noir, Blue Night marks the stunning start of a brilliant new crime series, from one of Germany’s bestselling authors.