Dr Juliana Fortis goes by many names – and usually not the same one twice.  For three years, she has been on the run from her former employers – a government agency so small that it doesn’t have a name.  In that role, she worked in the background to prevent terrorist attacks, extracting information through the use of chemical… persuasion.

When she is contacted by a former colleague, she is immediately wary and suspects a trap.  But the invitation is so tempting – one last job, in exchange for her freedom.  Hoping for the best, but expecting the worst, she takes the job, but the information that she gains only serves to make her situation worse.  And flight may no longer be an option for her…

Stephenie Meyer is, of course, best known as the author of the Twilight series.  I’ve not read those books or seen the films – if I’m honest, they don’t really appeal – but I was immediately intrigued when I heard that she had written an adult thriller, and I was even more excited when I received a little teaser package in the post with the information that I would be sent a copy for review!  I particularly liked the syringe-pen: 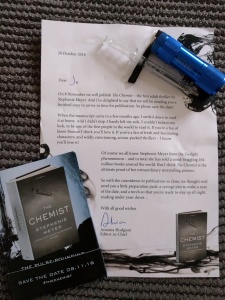 I found this to be a really enjoyable thriller – it’s perhaps not the best that I’ve ever read, but it’s good, fast-paced and there are plenty of twists and turns to keep the reader on their toes.  And I particularly liked the chemical aspects that are brought into the novel.  When she worked for the government, Dr Fortis was known, a little disturbingly, as The Chemist, and she has lots of little tricks up her sleeve (and in her belt, her earrings, her shoes and… basically everywhere) so that getting too close to her might be the last mistake you make.

I have to admit, I’m a little in awe of Juliana (hooray for small women!) – who goes by the name of Alex for the majority of the novel.  She’s clever, brave and uses her knowledge and skills to her advantage at every turn.  She somehow manages to be both feisty and cold, depending upon the situation and who she’s dealing with.  Determined to survive, she has developed the skills that she needs to deal with a whole host of situations whilst she’s been on the run, and I was on her side before I even knew who the other side were!

As well as the typical aspects of a thriller, there is also a love story in here.  Now, I didn’t fully buy this aspect of the novel (yes, I know – everything I’ve said already, and THIS is the bit I struggled with!), and I can’t really say why that is without giving away spoilers.  Essentially – I understood the appeal for Juliana (/ Alex) in that Daniel is someone whose life is so very different to her own.  It’s straightforward and safe, and I think that having been on the run for so long would make anyone want to reach out to someone eventually.  The reasons for his interest were less clear – beyond physical attraction – but I’ll let you read it and see for yourselves 🙂

This didn’t detract from my enjoyment of the novel, however, and I found this to be a great read that I’d recommend to fans who are looking for some high-octane entertainment with a sassy heroine.

Many thanks to Ella Bowman, Sphere and Little, Brown Book Group for my copy of The Chemist, which was published on 8 November 2016 in eBook and hardback.